Issues of environmental degradation and our joint responsibility to the environment are the concerns of all religious leaders and communities and in recent times a number of Elijah Board of World Religious Leaders have made important contributions to the issue. Of particular importance for the survival of all forms of life is clean water. 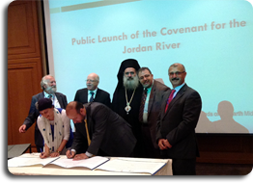 The Elijah Interfaith Institute was proud to be represented by two members of its Board of World Religious Leaders, Rabbis David Rosen and Awraham Soetendorp, at the recent signing of the Covenant for the Jordan River by religious leaders representing Judaism, Christianity and Islam. The Rabbis both spoke as part of the opening ceremony which included speeches by Christian leaders of many denominations and Muslim leaders from Jordan and Israel and Palestine. Elijah’s Director of Educational Activities, Peta Jones Pellach, was also present to formally add the Institute’s endorsement to this important cause.

The event was organized by Friends of the Earth Middle East who presented a compelling introduction to the problems faced by all of us who treasure the River Jordan.

An important component of the meeting was the launch of educational resources based on Jewish, Christian and Muslim sacred sources, (a separate booklet for each faith group). It is intended that the booklets, which will eventually appear in English, Arabic and Hebrew, will be used by religious leaders and teachers with their communities to draw attention to the religious obligations to preserve water, as well as the special place of the River Jordan in these three traditions, both in history and as having sacred qualities. Representatives from the different religions previewed the booklets in their draft editions and made suggestions as to how they could better reflect the sanctity of water and the River Jordan in particular. 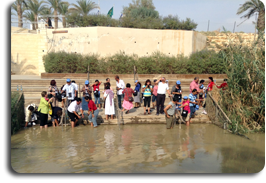 The program included a visit to the Jordanian side of the baptismal site where John baptized Jesus, alongside the Hill of Elijah – most significant for our organization. It was sobering indeed to realize that the Jordan River is flowing at 4% of its original capacity. Indeed, at the baptismal site, the river is a stagnant, dirty creek – not conducive to religious ceremonies or commensurate with its significance.

All documents associated with the meeting that took place in Jordan, 10-12 November, 2013, are available on the website of Friends of the Earth, Middle East.

2. Other water related activities of Elijah

This is not the first time that Elijah leaders have been active in issues of the environment, particularly matters relating to water.

Song of a Little Girl by the River Jordan:
You can give me a name.
You can call me by any name
Lily, Rebecca or Anna, Kyung In, Deepa, Tete, Pifai …
For my name is not written in the Bible.
But I want you to hear my song.
I am the little girl in Captain Naaman’s Household
I may be from an indigenous tribe or an impoverished background
Or maybe I was trafficked and sold to my master
I loved my mistress
I saw her weep to see her husband suffering
I also wept with her to see her pain
But our tears were waters of strength for our soul
I wanted my master to be healed my mistress to be happy
It is I who gave them the good News about Prophet Elisha
It was I who shared with them about the healing powers of River Jordan
Rich with minerals and healing properties
Oh brothers and sisters
Hear my song. 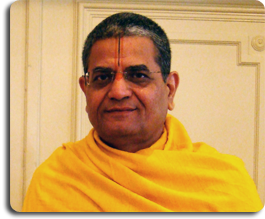 A lecture given by Acharya Shrivatsa Goswami at the India International Centre, New Delhi on 19 November 2013 as a second of the Manthan series which is aimed at relating traditional wisdom to contemporary concerns.

“The major focus of today’s scientific explorations is to find the planets with availability of water, despite water being a majority natural element on earth. The reason is simple. Water is life. The Upanishads say Earth is a solid form of water, water is the atmosphere, water is the environment, the space, Gods and humans, animals and birds, grass and trees, they are all various manifestations of water. A great woman sage, Gargi is amazed to see all this and wonders “is the warp and weft of this world laid upon water?” Another sage declares that “for the first time the human soul appeared from water itself.” However fertile the land, given the best fertilisers, the most potent seeds will not sprout without water. Life and its sustenance is dependent upon water.

We are reminded of the story of Krishna jumping into the polluted waters where he fights and subdues the snake of pollution called ‘Kaliya’. As all the civilized and scientifically advanced countries do, he also disposed the containers of deadly pollutions or affluent into the deep ocean. The message is very clear, even Krishna who is the God himself, cannot kill pollution once created, at best it can only be contained and disposed.

Krishna, a great lover, falls in love with Kalindi, the embodied River Yamuna and eventually marries her. He is inseparable from the River. That’s why Rahim tells us “please take care of water because without it the wheat flour cannot be cooked, the pearl will lose its lustre and the humans will lose their character.”

Religion can play a major role in the conservation of water resources for the welfare of humanity and especially for the sake of generations to come. In Hinduism there is a distinction between physically-chemically pure water from the sacred water. For ritual purposes water drawn by mechanical sources is unfit. Water from natural sources like rivers, ponds, wells, springs etc. is sacred. The reason is simple, if we continue to use the natural resources we shall take care of them and will not draw more than what we require. Mechanical methods are always prone for water wastage.”