In several weeks, Alon Goshen-Gottstein’s newest book will be published by Fortress Press. It is dedicated to Martin Luther and to a reappraisal of his antisemitism, in a broader context of Jewish-Christian relations and of interfaith relations in general. The book has a forward by the most renown expert in the field of “Luther and the Jews”, Thomas Kaufmann of Gottingen. As Bishop Lennart Koskinen writes, in his endorsement of the book: “Goshen-Gottstein’s study of “The Luther model” opens up a deeper understanding, not only of Martin Luther, his theology and historical significance, but also of how basically good religious thoughts can go wrong. This book is a role-model for good interreligious dialogue and deeper understanding also of views you cannot share.” 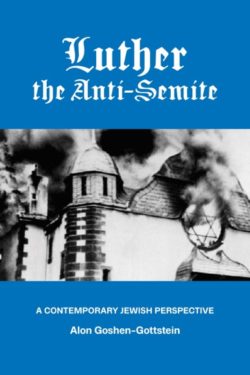 A summary of some of the key points of this book in popular form is available here.

2. Review of Luther the Antisemite

As we mentioned in the previous edition of Wisdom, a symposium devoted to Alon Goshen-Gottstein’s work in interreligious theology was held recently in Jerusalem. Karma Ben Johanan reviewed a pre-publication copy of Luther the Antisemite. Following are excerpts of her presentation. 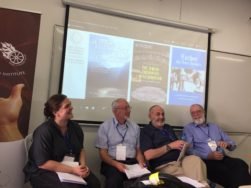 The last decades have shown an unprecedented process in the history of religions. Coping with the disasters of the 20th century on the one hand, while facing processes of globalization, modernization and wide dispersion of knowledge on the other, world religions encountered a new sense of connectedness uniting them, a new willingness to encounter each-other, and often to learn from each other.

But even if religious thinkers and leaders assume that they can indeed learn from other religions, recognize the best parts in them and attempt to take up these parts in order to refine their own traditions, does this mean they can also learn from other religions’ mistakes? Should religious thinkers be open to learn not only from the highest, noble, and universal parts of other traditions, but also from their self-contradictions, their misuses and abuses, their scandalous absurdities, historical atrocities, their sins?

This question becomes ever harder in the specific context of Jewish-Christian relations. Considering the grave historical a-symmetry between these two sister-religions–Jews being the direct objects of Christianity’s dark side–should Jews use Christian anti-Judaism, perhaps even anti-semitism, to reflect on their own tradition? What could the victim learn from the persecutor’s lesson? As Alon Goshen-Gottstein comments in his book, Jews rarely sympathize with Christianity to the extent that they will admit to share with it some of its admirable aspects. How then would Jews be able to perform an even greater leap of sympathy and reflect on themselves as sharing some of Christianity’s failings?

This is exactly the leap that Goshen-Gottstein’s book on Luther offers to do. While many books in the J-C genre strive to bolster the newly found C-J friendship by emphasizing the positive elements shared by both traditions, this book takes a brave step—and a crucial one in my opinion—towards Jewish self-reflection on those very aspects of Christianity which proved to be disastrous to Jews, a self-reflection done precisely by taking a lesson from the Jews’ arch-nemesis himself: Martin Luther.

Significantly, Goshen-Gottstein attempts this self-introspection, not merely through the allegedly objective gaze of an unengaged historian, but as a Jewish Orthodox rabbi, thus bringing these difficult questions into the internal discourse of the faith community.

Where, then, did Luther go wrong, and can Jews, through self-reflection and through an attempt to understand Luther rather than to use his travesties as fodder for self-vindication, recognize in Luther’s challenges some of the theological obstacles which they themselves are facing?

Luther’s theology of Judaism is derived from the theological foundations of Christian supersessionism, though it contains its own original elaborations. Superssessionism, or Replacement theology, rationalizes the theological problem caused by the Jewish rejection of Jesus Christ. As a basic theological strategy contending with the fact that Christ’s own people rejected him as the fulfilment of their messianic hopes, as these were expressed in the Hebrew Bible, Replacement theology establishes a conceptual rift between the Jewish people and their book. The Church radically reinterpreted the Hebrew bible in the light of Christ, thereby alienating its Jewish interpretation as blind or as deaf to its real, spiritual, meaning. The fact that the Church had introduced the Old Testament to its sacred canon—a fact which is now, in the age of reconciliation, used in some theological circles as an indication of respect for Jews—originally increased Christian antagonism towards the Jews, and not vice versa. As both Alon Goshen-Gottstein and Thomas Kaufman point out, Luther’s devotion to the Old Testament, that, in Kaufman’s words, “made the Bible in the vernacular an integral part of the faith and was to bear remarkable intellectual and cultural fruit”, is “profoundly and intimately connected” with intolerance towards the Jews.

This ancient theological splitting of the Jews from the Old Testament, thereby ipso facto ruling out any respect for the Jewish structure of meaning, is closely connected to another cluster of theological ideas consolidated throughout Christian history, referred to by Alon Goshen-Gottstein as the “witness from history”. According to this line of thought, the very error of Jewish interpretation, which Paul had termed the “carnal” reading of the Old Testament, is proven by the Jews’ historical fate; while they continue to look for worldly success and expect the redemption of “earthly” Jerusalem, their present humiliation and dispersion among the nations prove that God rejects the Jewish interpretation of Scripture and prefers the Christian one. Political inferiority is thus regarded as a divine punishment for the misguided (and political) messianism of the Jews.

However, these doctrines gave rise to a contradiction with another, no less foundational theological attitude to history. Christian theologians have traditionally argued that it is futile to judge the truthfulness and “choseness” of the Church from the tumult of history, since the eternal nature of God’s Will cannot be divined from the instability of human institutions. Thus, Christian teaching firmly claimed that even though God does act in human history, His plan cannot be deciphered by human beings. This, as you may recall, was Augustine’s key argument against the Pagans who accused the Christianization of the Roman empire for its fall. But while Christian thinkers were careful not to draw any conclusion from history, knowing well its deceiving nature, and preferred to put their hopes in salvation that lies beyond this world, whenever they cast their gaze towards Jewish history, they were surprisingly keen on interpreting it as directly indicating the revocation of God’s covenant with the Jews.

After the Holocaust and the foundation of the State of Israel the Christian doctrine of Jewish suffering as testifying to God’s wrath was no longer tenable. Perceiving the destruction of European Jewry as a just punishment was morally outrageous, but it was also theologically inconsistent. First, because the Augustinian doctrine had claimed that the Jews must continue to survive in their misery in order to testify to Christian truth, and not to perish. No less so, because the establishment of the State of Israel refuted the Christian prediction according to which the Jews were destined to eternal exile.

Historical facts were thus crucial in Christianity’s turn of heart towards reconciliation with the Jews, and in the inauguration of what Israel Yuval termed “a post polemical age”.

Yet the same historical events, which refuted the classical Christian “witness” thesis, have posed the opposite challenge to Jewish theology. The appeal of history as a theological and eschatological realm is stronger than ever in Judaism, which was a lot more open to “the witness from history” than Christianity in the first place (this is exactly why Christianity’s worldly success was so theologically problematic in the eyes of Jews). The controversy over the correct interpretation of recent Jewish history is undoubtedly one of the greatest theological challenges Judaism faces today. For many Jews, the events of the last century testify clearly that it is, after all, the “carnal”, earthly, even political reading of the Hebrew Bible that better captures the divine plan for the Jewish people, and that Scriptural prophesies are being realized here and now. This conviction reflects also on Jewish attitudes to Christianity, and to the Christian reading of Scripture.

Would Jewish theologians be willing be open to hear history’s testimony not only about new productions of past hostilities, but also about friendship and mutual respect? Would they look at Christians not only through the dark mirror of mutual contempt, but also through the shining mirror of penitence and reconciliation? These are the questions, which Alon Goshen-Gottstein’s Luther book invites us to ask.

3. Eugene Korn on Goshen-Gottstein on Thinkers of the Jewish-Christian Relation

At the same session of the World Congress of Jewish Studies, Eugene Korn reviewed a forthcoming manuscript devoted to three recent Jewish thinkers who have reflected on Judaism and its relation to world religions – Abraham Joshua Heschel, Jonathan Sacks and Irving Yitz Greenberg.

In a famous television interview near the end of his life, Abraham Joshua Heschel announced that he believed, “God is a pluralist.” That is, God has willed—and continues to will–that a multiplicity of religions exist among His human creatures—and perhaps even more strongly, that each religion possesses a bit of Divine Truth. 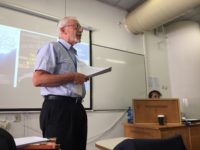 If this is so, we are faced with a number of spiritual and intellectual challenges. On the human experiential level, how can we see the Image of God in the face of the religious Other? And how do we create the spiritual space to dignify and respect him? Can we find a way to validate his beliefs and even assert their truth without betraying our own religious convictions? And are there boundaries to religious legitimacy? How can we prevent this healthy pluralism from degenerating into unrestrained relativism that mocks the entire notion of Truth?

As Jews we need to find seeds within our biblical, rabbinic and halakhic traditions that can sprout to support this kind of theological openness. How can we find a way to let the Jewish fly out of its natural bottle of parochialism and theological ethnocentricity so it can enter our modern interreligious world?

These are the questions that burn within Alon Goshen-Gottstein’s soul as he engages three of the four most prominent Jewish pluralist theologians of our time.