Jerusalem has been in the news this month. President Trump’s recognition of Jerusalem as Israel’s capital continues to reverberate in multiple ways in the international arena and in people’s mind. With this strong focus on Jerusalem, we would like to share with readers of Wisdom proceedings of a recent conference produced by Elijah, along with the Konrad Adenauer Foundation and the University of Bologna and the Notre Dame Jerusalem gateway.

The conference titled “Naming the Sacred” sought to bring historical depth and perspective to an earlier series of international discussion on Jerusalem, those carried out in UNESCO. Following is a conceptual summary of key points that emerged in the discussion. A fuller summary, with reference to specific lectures, along with the program, is available from Elijah. 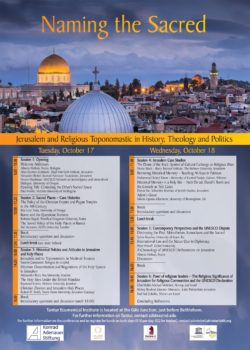 Contested religious sites are a function of changes in systems of belief (religious or non-religious) and of changing political power. Often, these two go hand in hand.

The change/contestation of religious sites can take the extreme form of destruction of previous religious cultures. Some recent examples include the destruction of the Buddha statues by the Taliban in Bamyan and ravages to historical memory in Iraq by ISIS.

Historically and universally, we witness sacred sites layered, so that their purpose and function shifts over the ages. We may refer to this as spatial supersessionism, where the newer strata of religious traditions triumph over the older strata, representing the past.

Recognition of sacred sites by international bodies such as UNESCO can play a role in their protection and in the protection of the rights of multiple religious communities that maintain multiple memories. Conversely, organizations can be drawn into the realm of sacral politics, and end up playing a destructive role in relation to contested spaces and their relation to different religious communities.

Jerusalem is arguably the most charged universal sacred space, in terms of continuing conflicts – both competitions of memory as well political and military conflicts, lasting millennia. Jerusalem is therefore a prime instance of spatial supersession and of the problems associated with erasure of memory and how sacral politics bring together political power, military conquest, religious memory and sacred space. Its history is rich, complex and the challenges in all these domains are ongoing.

Recent discussions of Jerusalem in UNESCO’s Executive Committee show the opposite of sensitivity and appreciation for the religious and historical complexity that is Jerusalem. This has come to expression through one of the mechanisms that has served sacral politics throughout the ages – the question of naming the sacred. Jerusalem has been referred to in multiple UNESCO decisions only or primarily by its Arab/Muslim name, with intentional erasure of the Jewish and Christian memory and associations to Jerusalem in what Jews call the Temple Mount. This question of naming, which is only one part of the application of sacral politics, has led to a comparative study of naming and renaming the sacred in various localities, in relation to changes in power. 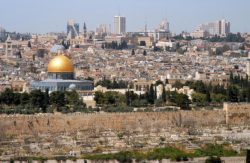 The conference studied various instances of renaming of holy places, following political and religious conquests. We sought to identify patterns and precedents in light of which UNESCO decisions could be better contextualized and appreciated.

When the Roman empire became Christianized, in theory pagan places should have been destroyed. Historical reality did not conform to the expectation. Pagan temples were maintained, even by emperors. Financial and political powers played into preservation of religious identity and memory, and prevented total erasure.

Similarly, the Ottoman takeover of Byzantium, did not lead to erasure of memory. While renaming Aya Sofia, Christian relics were incorporated into the Sultan’s home, thereby assuring a kind of continuity of memory.

Ottoman rule in the Holy Land was based on preservation of memory, and upholding the respective rights and memories of the different religious communities. Part of the crisis of the British mandate in relation to different religious groups was that it lacked the depth of memory by means of which to manage the holy sites, in the absence of archives and the legal and other expertise that the Ottomans had. This impacted negatively on the British ability to manage the holy sites of Jerusalem.

Renaming occurs in Rome under political conditions of Rissurgimento.. Significantly, Rome itself is never renamed; only its streets are renamed in line with political needs. It is interesting to note that even though streets are renamed, squares maintain their old names.

The most striking instance of erasure of historical memory and the renaming of religious sites is Soviet Russia. Holy sites were renamed in light of soviet agenda, seeking to erase their religious memory and their meaning to religious communities. The case of Sergey Posad is the most striking, paralleled by the transformation of the Church of the Saviour into a swimming pool.

Looking at UNESCO decisions in a comparative context, they turn out to be closest in kind to Soviet practices. Notably, even though driven by Arab countries, they do not follow the Muslim precedent of earlier Muslim regimes in the Holy Land.

It is understandable, perhaps, that the soviets would wish to erase former memories, as part of their ideology. However, it is not understandable how an organization that has a mission of preservation of memory and of cultural heritage would engage in such practices, that are contrary to its own mandate. 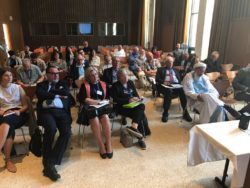 The history of renaming makes us aware that beyond the question of sacred places and changing memories lies the question of political power. There are different motivations to the application of power. One kind is the removal of error of false religious beliefs (Constantine). This is analogous to the Soviet intention of delivering people from superstition.

The challenge to application of power is the balancing of top-down mechanisms of authority powers with the beliefs of people and of diverse religious communities. Time emerges as a crucial factor in bringing about top-down transformations into communities. Acts that are undertaken in a one-sided authoritarian way involve some violence to communities.

Political powers often manipulate or apply memory so as to suit their political needs. Israeli policies on Mount Zion, following 1948, witness willful manipulation of historical memory, that on the one hand appeals to the status quo, but on the other hand applies it selectively, in accordance with the identity and political needs of Israel. Thus, Christians are prevented from changing the status quo of prayer in the room of the Last Supper, while the status of Jewish prayer changes following 1948.

Closer scrutiny suggests that the very notion of a status quo is problematic. The notion that has served both the British and the Israeli ruling bodies was never negotiated or worked out by communities . It is an imperfect construct that seeks to maintain certain practices, while failing to tackle some deeper issues that require dialogue between communities. It is more in the nature of a cease-fire agreement, than a peace agreement.

Religious communities emerge time and again as important players that cannot be overlooked or ignored in the long-run, through the application of top-down expressions of power. 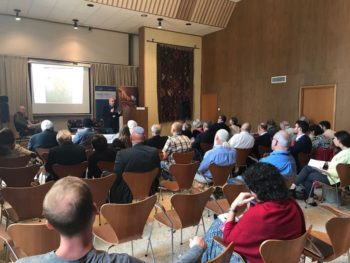 Scholarly Retrieval of Memory – The Call for Responsibility

Given how closely memory and contested religious sites are related to issues of power and political control, one recognizes that there are forces that continue to shape memory to serve the needs of the present-day political power. Sacral politics requires engaging history on the one hand, and the memory or memories of multiple communities on the other. Only scholars can separate the admixture of myth and history, as these inform sacral politics.

Recent UNESCO decisions were characterized by lack of consultation with scholarly authorities on any of the relevant issues. This has led to a simplistic approach to complex issues, and herein is the original sin of these decisions.

It is up to scholars to help retrieve lost memories, in the framework of contested sacred spaces. Our conference offered several examples of this:
• We learned how Christians around the 8th and 9th centuries went to the Holy Sepulcher and then to dome of rock, relating to it as if it were the Temple.
• Related to this is the fact that the oldest name of Jerusalem was Bayt el Maqdas, echoing the memory of Jewish Temple.
• Anaylzing its inscriptions, we recognize the Dome of the Rock is actually a site of encounter between the different faiths. Speaking the language of the people, and choosing quotations that would address contemporary theological debates, its epigraphy reveals how it functioned as a symbol of change of religious language.
• Further proof for the role scholarship can play in the retrieval of memory, again with reference to Jerusalem, was provided by Muhammad Suheyl Umar, who reported on the view of Jerusalem in Pakistan, and more broadly in the Indian sub-continent. Through a process of study, Muslim authorities revised existing teaching that considered the Temple mount to have been taken from Jews and given to Muslims, and affirmed an alternative view of temporary custodianship, wherein the Jews never forfeited their rights to the Temple Mount. This led to revision of school curricula. It also serves as an opening for possible reconciliation on the political plane, once erroneous teachings have been removed, in Umar’s view of what constitutes correct Islamic teaching. This suggests that retrieval of correct historical memory is possible and is the responsibility of scholars. 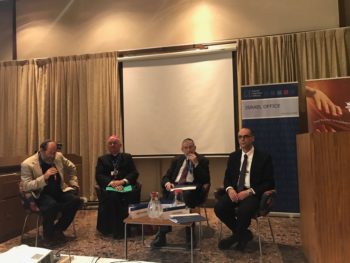 The Call for Sensitivity

It is not superfluous to recall that in addition to scientific complexity, there is also an element of sensitivity and practical wisdom that one must apply in dealing with contested sites, especially Jerusalem.

International or ruling bodies, who are foreign to the complexity of local realities, may act without due appreciation of the sensitivities and feelings of local communities, thereby aggravating relations on the ground.

Raymond Cohen illustrated this with reference to the British mandate and how actions of some of its representatives contributed to deterioration of Jewish-Arab relations. The disruption of Yom Kippur prayers at the Wall in 1928, in the name of the status quo, ended up having negative long term effects on local relations and contributed to the weakening of British rule.

Any attempt to deal with Jerusalem, by international and diplomatic bodies, engages us in the complexity of memory, and in sacral politics. It is only when we are aware of the complexity of Jerusalem’s history and make room for all memories, that we can begin to open up to processes that will lead to the healing of Jerusalem and the memory of its many communities, and to Jerusalem fulfilling its higher calling as a city of peace.

We conclude with a prayer from the Psalms for the Peace of Jerusalem.

A Song of Ascents; of David.
I rejoiced when they said unto me: ‘Let us go unto the house of the Lord.’
Our feet are standing within thy gates, O Jerusalem;
Jerusalem, that art builded as a city that is compact together;
Whither the tribes went up, even the tribes of the Lord, as a testimony unto Israel, to give thanks unto the name of the Lord.
For there were set thrones for judgment, the thrones of the house of David.
Pray for the peace of Jerusalem; may they prosper that love thee.
Peace be within thy walls, and prosperity within thy palaces.
For my brethren and companions’ sakes, I will now say: ‘Peace be within thee.’
For the sake of the house of the Lord our God I will seek thy good.