The Elijah Educational Network and Bibliodrama 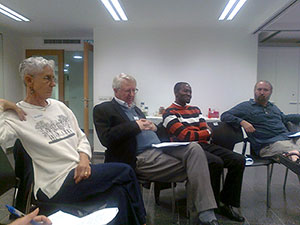 The Elijah Educational Network has added Bibliodrama to its repertoire of techniques for interreligious dialogue. Elijah has now conducted three Bibliodrama workshops in Jerusalem, held under the skilful leadership of Yael Unterman where Christians, Muslims and Jews have explored stories from various traditions using this unique methodology. The workshops are part of an international project to explore the effectiveness of Bibliodrama as a tool for interreligious dialogue, funded by the European Union.

For the first meeting, we decided to use a culturally/ religiously neutral text, to introduce the method and avoid some of the sensitivities that can arise when we tackle sacred texts. Hansel and Gretel is well-known to all who have grown up in a European context. There are Hebrew (Ami and Tami) and Arabic versions, too. It is a story with characters who (potentially) can be interpreted in various ways and who undergo various tests, it has a sinister overtone, raising questions about the existence of and response to ‘evil’, and it has an ending of the victory of virtue or ‘happily ever after’, which is in itself worthy of analysis. In other words, it has many of the elements we might find in a sacred text without the claim of ‘truth’ or even ‘morality’. 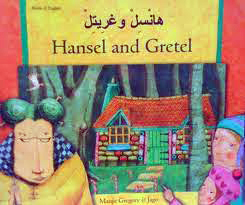 Yael skillfully took the group through the experience of responding in the voices of the various characters, (including even the gingerbread house), of creating dioramas with empty chairs representing characters, of hypothesizing about what might have been and finally, of putting God into the picture. Participants were totally engaged in the process and even those who were quiet at the outset seemed to get into the mindset. The success of the process is testified to by the fact that we ran out of time to do very much training or analysis. What we succeeded in achieving was enthusiasm for the process and drawing out people so that they were not self-conscious in each other’s company. This has been built upon in subsequent sessions exploring the sacred stories of Christians, Muslims and Jews.

Combining a close reading of biblical, actually any scriptural, text with searching, imaginative questions, Bibliodrama offers people of all ages and levels of knowledge an opportunity to experience of a method of creative study that, in the past twenty five years, has changed the way we read the Bible. You can read more about it here.

The Elijah Interfaith Institute is a joint recipient of a prestigious Grundtvig Grant from the European Union, to test the technique of Bibliodrama as a tool for Interreligious and Intercultural dialogue. Other partners in this international project come from Poland, Iceland, Hungary and Turkey. Grundtvig Multilateral Projects are undertaken by institutions or organisations from different European countries working together, pooling knowledge and experience, in order to achieve concrete and innovative results or products ‘with indisputable European values’. Elijah’s involvement in this project exploring a new technique for intercultural and interreligious dialogue, underscores the unique contribution Elijah can make as an international organisation based in Israel.

Flyer: BASICS – Bibliodrama as a way of intercultural learning for adults.
About the Partners 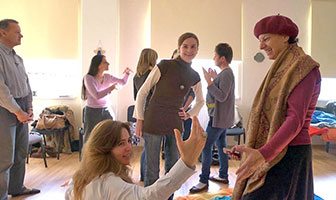 Yael and Elijah’s Director of Educational Activities, Peta Jones Pellach, travelled to Poland to meet the other partners in the project and to participate in a training seminar. The group is diverse not just in national and religious backgrounds but also in the range of professions represented. The preparatory meeting allowed for an intense exchange of ideas, highlighting the different approaches each team will take as well as establishing a common basis for moving forward.

The project requires Elijah to conduct 60 hours of Bibliodrama workshops in Israel over two years and to compare the outcomes for participants with outcomes in the other participating countries. Towards the end of the project period, Elijah will be the key organizing agency of a conference comparing various methodologies for successful interreligious dialogue in Krakow, Poland.

When Elijah was presented with the challenge of recruiting participants for the Bibliodrama project in Israel, we identified three problems: language, geography and motivation. Finding a common language, in a very literal sense, amongst Israelis and Palestinians is not easy. English is the least culturally biased but it means that only a highly educated group can participate. Our dialogue group is based in Jerusalem and in order to reach Palestinians as well as Israeli Arabs, we want to draw on residents of surrounding towns such as Bethlehem. There are many logistic difficulties, including the fact that residents of towns that are under the Palestinian Authority need permits to come into Israel proper. There are many interfaith and intercultural dialogue groups already in existence – what would draw people to this particular project if they have not already been attracted to the various dialogue opportunities? 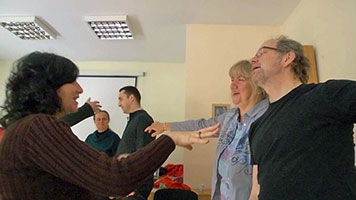 In order to overcome all of these difficulties, we chose to work with the Interfaith Encounter Association, which boasts a cadre of local branch leaders who have the language skills, the willingness to go through the routine of acquiring passes, if required, and travelling to meetings, and who are looking for new skills that they can bring back to their various groups. Because Interfaith Encounters has few Christian members, we extended the invitation to the Rainbow Group, a Christian-Jewish dialogue group that focuses on sharing theological insights. In other words, this is not a group of ‘ordinary’ Israelis and Palestinians but a group that is highly motivated to pursue successful dialogue and already has some of the tools to do so.

Our rationale in working with this elite group is to train them in the art of Bibliodrama so that it will become a tool in their work as dialogue leaders and teachers. The workshops comprise the practice of Bibliodrama and training in the method, based on directed reflection on what they have experienced. It is expected that the people we train will take the methodology to a much broader public.