Special Supplement to May Issue 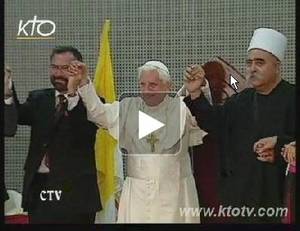 As Alon Goshen-Gottstein soulfully intoned a peace song/prayer composed for the occasion, Pope Benedict XVI held the hands of religious leaders in the Holy Land and joined them in prayer.

SEE THE VIDEO of this breakthrough moment in interfaith relations

Click on the image above to go to YouTube and watch the prayer-song for peace.  If the introductory words are not yet up, they may be seen (with some dubbing) at http://www.kathtube.com/player.php?id=10084.

To watch the whole event, including introductory words and song, click here.

Following are some samples:

"For a pope who sometimes struggles to think in pictures, it was almost a “John Paul moment,” meaning a symbolic gesture reminiscent of his charismatic predecessor, Pope John Paul II…As it turns out, the pope got a PR assist from Goshen-Gottstein."    John L. Allen Jr., cnn.com

"Talk about a picture being worth 1,000 words. There’s more than that behind this picture of Pope Benedict holding hands and singing a song for peace with leaders of other religions in Nazareth’s Basilica of the Annunciation on Thursday. This might seem like an innocent gesture to most people who see it. To some Vatican correspondents following the pope on his Holy Land tour, it was an unprecedented step that spoke volumes about the evolution of his theological thinking."   Tom Heneghan, reuters.com

Read it here at http://blogs.reuters.com/faithworld/2009/05/15/singing-away-theological-differences-in-nazareth/

"Vatican spokesman Fr. Federico Lombardi was asked if this marked the first time on the trip that the Pope prayed with Muslim and Jewish leaders. He replied, ‘I’d say that the rabbi had a ingenius and creative idea because nobody can object to singing peace.’ "   Catholic News Agency

Read it here or at http://www.catholicnewsagency.com/new.php?n=15986

Further news reports in all languages and viewer responses can be found on our site: https://elijah-interfaith.org/881/882/

This moment has transformed all those who watched it. But it remains unknown to many. The moment was designed to offer hope and encouragement to people of faith and goodwill worldwide. Help us share this moment. We would like to make an exceptional request: send this message to your personal mailing list, ask them to send it on. Let people know that there are other images and moments that give us the courage to go on. As one of our friends has said: If Susan Boyle could do it, so can we.