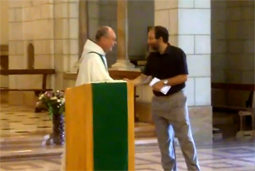 When the news reported that vandals had desecrated the Latroun Monastery near Jerusalem with anti-Christian graffiti, Jewish leaders and scholars were outraged. Politically inspired vandalism against mosques and churches has been on the rise, and it was important that rabbis and teacher should speak clearly on this subject. To this end, forty leading rabbis, present and past chief rabbis in Israel and abroad, along with many scholars and educators throughout the world, signed on to a letter to be delivered to the Latroun monks by Elijah’s Executive Director, Alon Goshen-Gottstein.

The letter stressed the understanding of Elijah’s scholars and leaders that the creation of humanity in God’s image is the great motif of the Torah and hence the belief that the Torah mandates full respect for the infinite value, equality and uniqueness of every human life.  With such an understanding, there is no place for hatred or bigotry towards those whose religious commitment is different from one’s own. The letter also mentioned Elijah’s ‘Theology of Religions’ project, through which we are compiling sources related to the ‘Jewish Theology of the Other’ that will be invaluable resources in providing a model of Judaism that is compatible with these ideals.

It was a moving moment, when for the first time a rabbi addressed the monks from the choir, following Sunday services. Beyond condemnation of the vandalism and show of support it also was a gesture of friendship, and a first step in the formation of a new relationship. Indeed, the next encounter of friendship with the monks is already planned. Thus, the burning of the door of the monastery has become an invitation to walk through that door and to create new openings of friendship.

2. BASICS: The Elijah Interfaith Institute in an EU Partnership 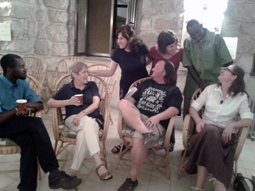 (Picture: Participants in the Jerusalem Bibliodrama group at Ecce Homo)

What is it like to leave one’s home and arrive as a stranger to a foreign place? Do you respond with compassion to a stranger in need or do your fears and prejudices overwhelm you? Why does a child rebel against her father and reject the values she has been taught? How would you cope in society if you were deaf and could not understand the conversations around you? How might you respond to the realization that you have been abandoned by your siblings and are completely alone in a hostile environment? These are just some of the questions explored in the Bibliodrama workshops held recently in Iceland in which the Elijah Interfaith Institute was an active partner.

Bibliodrama is a creative method of exploring texts, particular sacred sources. In many cases in Biblical texts, little about the characters is revealed in the text itself, so imagination and conjecture are the tools most required. Bibliodrama is also proving to be an important and accessible tool for sharing texts between adherents of different faiths, engaging participants in a creative and sensitive response to universal human questions. The Elijah Interfaith Institute is one of five organizations in five countries testing Bibliodrama as a method for interreligious and intercultural dialogue.

The project, Bibliodrama as Intercultural Dialogue for Adults, (BASICS), sponsored by the Grundtvig Fund of the European Union, recently held workshops in Reykjavik, Iceland for all partners. The team representing the Elijah Interfaith Institute was led by Director of Educational Activities, Peta Jones Pellach, and Bibliodrama expert, Yael Unterman, and included Christian and Jewish members of the Jerusalem workshop. Other delegations consisting of Christians, Muslims and Jews came from Poland, Turkey and Hungary. 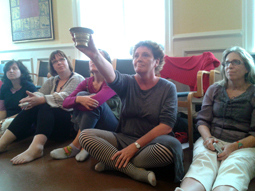 The program included 5 sessions of Bibliodrama practice, with each delegation demonstrating its unique approach to studying and role-playing sacred texts. The Elijah group presented the first part of the Joseph story from the book of Genesis. The Hungarian team chose the Book of Ruth. Other stories presented were The Prodigal Son and the Good Samaritan from the Christian Bible (the New Testament) and a tale from Turkish folk-lore, which is featured in the Sharing Wisdom section of this newsletter.

Through the experience, participants learnt to appreciate each other’s distinct belief-system. Even when studying a common text, the different readings of the different traditions sometimes came to the fore. On the other hand, the most important lesson of Bibliodrama has been the shared humanity – the fact that our responses to human situations is less a factor of our religious background than our personality and life experience.

This intense activity of Bibliodrama was followed by a full day devoted to understanding Interreligious Dialogue, which was led by the Elijah team. The Elijah presentation began with asking each person to reflect on her/his most important values. A person’s values are often but not always reflective of a religious tradition. The challenge was to hear each other’s values without judging or comparing to one’s own; to hear them respectfully, on their own terms. The same is true for studying each other’s texts. If we can read texts with openness and respect, we can be enriched by each other’s wisdom. Elijah provided an example of how the study of religious texts can provide an opening for dialogue that can heal some of the misunderstandings on which religious hostility is based. Participants were often surprised to learn what other faiths had to say about the religious ‘other’. They expressed regret that they were not more literate about their own faiths as well as the texts of others, highlighting the need for conventional study of texts to supplement the creative approach.

Despite language difficulties – the program was conducted in English and some participants required translation – everyone present was deeply impressed by the power of sacred texts to provide inspiration even for those from a different faith. This is, of course, Elijah’s motto: that sharing wisdom is a way of fostering peace.

The following story was shared by the Turkish delegation as the basis of their Bibliodrama workshop at the recent meeting in Reykjavik. It is reproduced here with thanks to Safak Ebru Toksoy, our partner from Kocaeli University Institute of Health Sciences (Turkey), which is a major research institution, highly experienced in the development and implementing of training programs, with specialists dealing in spirituality, cultural and religious attitudes and approaches to life and their advantages and consequences in trauma and disaster therapy.

When the text was played out, it raised issues of ‘deafness’ to the other well beyond a physical inability to hear, including language and cultural barriers to understanding the other.

THE DEAF’S VISIT TO THE SICK 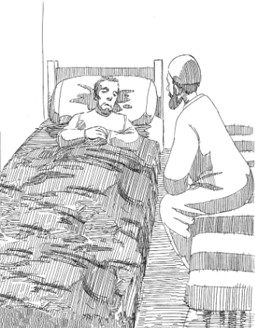 There was a poor fellow who was hard of hearing. One day he was told that his neighbour had fallen sick.

The man felt very sorry about his neighbour’s sickness and decided to visit him. Yet he thought to himself, ‘But how am I going to understand what my neighbour says with my ears hard of hearing? Add to that the possibility of his voice being even softer due to the sickness… Yet to visit the sick is very important. I definitely must go.’

The man could not decide what to do for a while. In the end he came up with the idea that he could guess what the sick would say, and hence he could be prepared.

He told himself that he could start by saying ‘My dear suffering neighbour, how are you?’ after greeting. The reply, he guessed, would be ‘I am fine or good’ for sure. Then he could continue saying ‘Thank God’ and ask him what he ate. He thought the neighbour would respond by saying sherbet or lentil soup for sure.  He planned to say ‘Have good health, good appetite. Which doctors take care of you?’ in return. He guessed his neighbour would mention the name of a doctor. Then he planned to reply by saying ‘Wherever he goes, he brings good fortune. When he comes, things start going well. Whomever he sees gets healed.’ This way, he thought, he could complete his duty of being a neighbour.

The man went to see his sick neighbour with these questions and answers in mind. After greeting he asked the neighbour how he was. The sick was in great pain and looked exhausted. He replied, ‘I feel like I am dead.’ The man replied back by saying ‘Thank God.’, thinking that he got the answer he constructed in mind before. The sick neighbour felt offended and hurt. ‘What kind of a saying is that’, he muttered, thinking that he was malicious.

The man went on with his second question and asked the neighbour what he ate. The neighbour who was upset with the first question replied by saying ‘poison’. The man said ‘Good, good. Have a good appetite’ in return.

Upon these lines of conversation the sick neighbour’s anger increased even more. Then came the last question of the visitor. The man asked which doctor was treating the sick neighbour. The neighbour replied with agony ‘Enough is enough! The angel of death is coming!’. The visitor replied with a smile, unaware of what was going on, ‘Very good indeed. Wherever he goes, he brings good fortune. You had better feel good and rejoice.’

While the sick person was distressed by the situation, the man was happy. He was thankful to God that he was able to complete his neighbourly duty.