Theology of religions is the field of reflection wherein a religion considers how it views other religions. This is one of the areas of continuing work at Elijah.

There are several fundamental issues that theology of religions tackles. One of them is “religious truth”. The challenge is as follows: If my religion is considered as true, how can I validate your religion. If it is equally true, then does that not detract from my own religion, which I consider to be the truth. The reverse question is – if we seek to advance interreligious relations and a positive view of the other, does that necessitate a view of the other’s religion as false. In other words, to what extent does the relationship between one’s religion and that of the other correspond to the division of true and false. Contemporary theologies of religion seek to construct understandings of religions that, while maintaining full appreciation and commitment to their own religion, do not do so at the cost of total invalidation of the religion of the other, declaring it to be false. This is a problem that cuts across all world religions. The present edition of Wisdom reports on two projects carried out in recent months, one involving Judaism and Christianity, the other focusing exclusively on a Jewish theology of religions.

The summer school explored a wide range of issues that impact our understanding of religious truth, including how traditional notions of religious truth might relate to historical and scientific discoveries as well as consideration of the implications of feminist theory to our understanding of truth. The purpose of the summer school was to cultivate the capacity for creative theological thinking, through dialogue between two partnering student bodies, representing different religious communities.
One of the striking discoveries of the summer school was the common recognition by both instructors that “religious truth” is related to spiritual processes and authenticity in ways that, in both their understandings, does not lead to exclusivist views of truth, wherein only one religion is in possession of the truth. This was noted in particular by appeal to the mystical traditions of Judaism and Christianity. This may account for the unusual degree of bonding and group cohesion that resulted from the summer school program. Beyond the rich intellectual menu, the two student communities seem to have been bonded by a higher quest for understanding that took the other community within its scope, creating spiritual and human openings in the same process.

3. Panels at the World Congress of Jewish Studies

Once in four years, in August, thousands of scholars of Judaism from all over the world gather in Jerusalem for the World Congress of Jewish Studies. Elijah has held programs for the past 3 congresses, where its interreligious work and its work in the domain of theology of religions has been featured. Read more about Elijah’s participation during the previous congress on the theme of ‘Election and Jewish Particularity’. 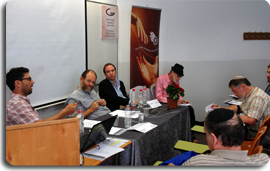 At the recent congress Elijah ran two sessions on the theme of religious truth. Several scholars had worked in the months leading up to the congress on essays that explore various aspects of the problem. These essays will be featured as part of Elijah’s website on a Jewish theology of religions and provided reading materials and resources for the summer school program, described above. These scholars include Michael Fagenblat and Shaya Rothenberg, Stanislaw Krajewski, Steve Copeland, Cass Fisher, Ira Bedzow and Meir Sendor, as well as Yehuda DovBer Zirkind and Or Rose. Two panels were held at the World Congress of Jewish studies. Our goal at these sessions was the same as our goal for the summer school – to develop creative thinking on theological issues. The papers were therefore constructive, drawing on historical precedent, with an eye to how historical exercises can inform contemporary theology. 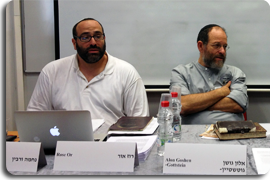 One session focused on the philosophical tradition, and included papers by Fagenblatt (Levinas), Copeland (Maimonides) and Fisher (the rabbis). The other focused on hassidic resources with contributions by Alon Goshen-Gottstein (Breslav) and Or Rose (Berditchev). Observers noted the unusual creative and constructive theological exchange that struck a very unique chord within the typical discourse and atmosphere of the congress.

R. Nathan critiques ideological controversy, based as it is on the supposed quest for truth, as a social vice that is of no benefit.

“Every person must know this so that he is spared the pitfalls that come precisely through truth that has not been properly clarified. This [recognition] will save him from the fire of controversy and opposition that uproots those who engage in dispute from both worlds unnecessarily. For this quality is the worst of all bad qualities in the world. For other qualities and desires are at least somehow necessary, though one must deal with them according to the Torah, even when they are permitted, so as to not engage in them too much. Still, they are needed for human existence, as in the case of eating and drinking and similar activities. But the matter of controversy is completely unneeded for a person. It destroys him and uproots him from both worlds more than all desire…and the controversy concerning the service of God, which is the controversy between the hassidim and the learners, or within the different camps of hassidim and learners – this controversy is worse than anything and destroys much and prevents redemption more than all sins of the Torah. And this controversy is simply unnecessary hate, and all this on account of truth, that everyone considers that truth is with him. But in truth, if he looks to the ultimate truth and does not mislead himself, he will certainly avoid controversy. For he will look at himself [and ask] maybe he is misleading himself. And even if he is not mistaken, he will recognize that you cannot achieve anything through controversy….especially during these generations, when Israel are in a lowly state and we have no political power, how can one rectify what requires rectification, all the more so by means of controversy? Because in rectifying the world and drawing the entire world to the service of God can only be attained by means of peace…and this is why Elijah and the Messiah, who are the instruments for the world’s fundamental rectification, will engage only in peacemaking…and therefore if truth incites him to engage in controversy, one must throw such truth away from oneself, casting it to the ground, for God does not desire such truth.”(Likutey Halachot, Ribit 5,23)

Truth can guide the individual aspirant towards making the best spiritual choices for herself. But once the truth becomes a social force, it must be controlled. The point of control is where it is associated with controversy. In the axiological confrontation between truth and peace, peace wins hands down.