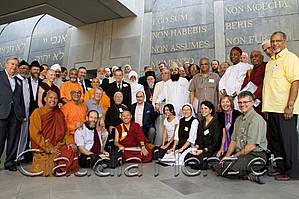 The Elijah Board of World Religious Leaders has just held its fourth bi-annual meeting. The meeting took place in the Holy Land, in Haifa and Galilee, and its host was Chief Rabbi Shear Yashuv Cohen of Haifa. Haifa, a city that captures the memory and aspiration of the prophet Elijah, has played an inspirational role in the founding of the Elijah Interfaith Institute. Holding our program in Haifa therefore evoked the organization’s roots, that continue to feed its extensive international activity. The meeting brought together about forty Board members, their representatives and the major religious figures of the Holy Land, with the support of the Elijah Think Tank, and special invited guests. The meeting was generously supported by the Fetzer Institute. Beauty was plentiful, as we enjoyed the hospitality and outstanding aesthetics of the various venues offered by the neo cathacumenal movement in Domus Galillaeae, by the Bahai community and by Haifa University.

What did we discuss? The theme of the meeting was “The Future of Religious Leadership”. Sharing what it means to be a religious leader in today’s world requires the kind of trust and openness that have come to characterize this group of leaders. We looked at the challenges that the different traditions face, and how they affect religious leadership. We tried to learn from each other how to cope with our common challenges. We took a close look at how religious leaders are being formed in our various traditions and considered how the future training of religious leaders might be enhanced, especially in the domain of interreligious relations.

Who did the meeting reach? The core audience are, of course, members of Elijah’s Board of World Religious Leaders. Elijah’s philosophy is that transforming the leaders opens the door to long term transformation within religious traditions. In that sense, it was a closed meeting. However, the meeting was opened up at various points. New communities, with whom we had not had previous contact, were included in our meeting. The Bahais were represented at our meeting for the first time, and we had the privilege of holding a part of our program at their inspiringly beautiful headquarters. We also spent time with the local Druze community. Some of the sessions were opened up to members of the Council of Religious Leaders in Israel . We also interacted with a variety of student bodies and youth communities, offering them a vision of model interfaith relations, while learning about their own realities and educational programs. A public event at Haifa University brought together students of all faith traditions for one of the finest moments in Elijah’s history. We met with Jewish, Christian and Muslim 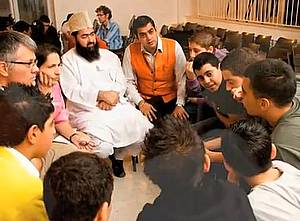 seminarians in their respective religious institutions. And we met with Palestinian students during a visit to the Palestinian Christian town of Bet Jalla. While deepening relations between members of the Elijah Board, the meeting also had broad impact. Through television and newspaper coverage the meeting also reached the broader public, both local and international.

What practical conclusions did the meeting reach? Deepening commitment to working together and to adopting the development plan, proposed by Elijah’s steering committee. The successful experience of reaching out to students and future leaders provides a basis for continuing activity. Large support was shown for the idea of implementing some component of common interreligious educational activity in the curricula of different seminaries and training programs. The visit to Bet Jalla also yielded a commitment to maintain relations with the young Palestinian students and to develop communication between them and youth in our various religious communities.

What was particular or special about holding the meeting in the Holy Land? Above all, the inspiration of the Land, its history and the spiritual life that it has sustained for thousands of years. The meeting included extensive visits to sites, holy to the religions of the land. These visits provided time for deepening relations, but such deepening took place through a spiritual sharing that was transformative for many of the leaders. I regret not being able to share some of the personal testimonies that leaders shared with me. Suffice it to say that for many, the power of the encounter with the spiritual life of Israel, its holy sites and its religious communities was not simply opening and inspiring, but transformative. It is more than likely that beyond any practical conclusions that we reached, the real fruit of the meeting is found in the spiritual lives and experiences of participants. We may not be able to measure this fruit or even report on it in detail. However, this very inability is, in its own way, a sign of its spiritual authenticity and an indication of the long term promise it holds for the leaders and their communities.

Being in the Holy Land was also an opportunity to deal with some of the painful realities of Israelis and Palestinians. One of the meeting’s themes was forgiveness and how it pertains to religious leadership. The depth of sharing of pain on both sides led to unprecedented intimacy between the leaders. It is no exaggeration to say that Elijah is now a place where the world’s religious leaders can cry together.

What did the meeting actually achieve? Everything described above is an achievement. As one local Palestinian leader described it, what we had achieved with the Palestinian students was a small miracle. The organizers certainly never lost sight of the miracle of how the meeting came together in ways that exceeded our expectations, despite how limited we were in funds and manpower. But if I had to sum up what the greatest achievement was, I would refer to the words one of the Muslim participants who offered a very moving testim 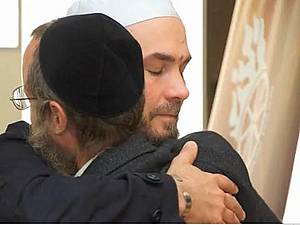 ony of what the meriting provided for him. The meeting gave him a sense of community. Now, each of our religious leaders belongs to a community, and when we initially brought them together, we brought them together as a “board”, a term that carries formal connotations. What has now been formed is a community, a community of religious leaders from different traditions and different parts of the world. It is a community based on profound relations, trust, and vulnerability. And this provides the platform for all future activities of the Board of Religious Leaders, as it continues to reach out to the leaders’ communities, to youth and to the public at large.

How can one get a sense of the meeting and the quality of interactions?

A copy of the program and the list of participants is available for download, by clicking below:

But perhaps more inspiring is the photo-video we just released on You Tube. In 10 minutes you can view a gallery of sights and sites, of special moments, but above all of faces and interactions that reveal more than words can. You are invited to view this photo-video by clicking here. 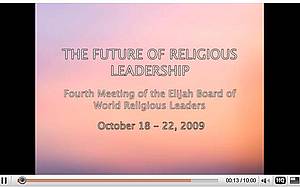 And how can one get a better sense of the actual substance of discussions? As always, the meeting of the Elijah Board of World Religious Leaders is prepared by a think tank of the Elijah Interfaith Academy. The meeting was based on the preparatory work of the think tank, as well as on the survey on religious leadership that many readers of “Wisdom” contributed to. If you absolutely can’t wait to know more about these. However, in the interest of not making this newsletter longer than it already is, we will return to these items in a few weeks in our next edition of “Wisdom”. However, as a token to the signing of the Charter of Compassion this week (November 12th), we will conclude in the traditional “Sharing Wisdom” with some reflections on leadership and compassion, drawn from the work of the Elijah Think Tank. 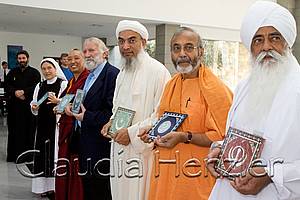 The similarity between how leadership is viewed in the different traditions also emerges from our survey on religious leadership. Participants in the survey were asked to rank the qualities they considered most important in a religious leader. Compassion ranks among the top three qualities, universally expected of a religious leader. 97% of respondents expected their local religious leader to be a model of compassion, and 94% of respondents expected their national or international leader to manifest compassion.
The common expectations of leadership and the similarity in how leadership is understood across traditions has led to an attempt to draw a composite picture of religious leadership. Within this composite picture compassion plays a prominent role. The following paragraph, taken from my summary essay, is relevant.
A further major component of a composite picture of religious leadership is being driven by compassion. Clearly, different religions will feature this notion in different ways. For the Buddhist, compassion is the ultimate telos of the religion. For others it may simply be a driving force, that informs the work of the religious leader. But all seem to concur on the importance of compassion to the vocation of the religious leader. It is also worth recalling that while the notion has figured in almost all our papers (its absence in the Sikh paper is likely an accident of its composition, rather than something indicative of a difference in the nature of Sikh religious leadership), it may indeed have figured even more heavily, had we made a point of featuring compassion. Let me illustrate this from a quote from the Jewish tradition, taken from the works of R. Nachman of Breslav, who offers various worthwhile reflections on leadership. R. Nachman writes: “ For the compassionate one will be their leader (Isa.49) – this suggests that only someone possessing compassion can be a leader…And such a compassionate one is found only in Moses our teacher, who was the leader of Israel and is its future leader” (Likutey Moharan 2,7,1-2). I bring this quote not in order to augment or suggest a different portrait of leadership than the one offered by Meir Sendor . I wish to suggest simply that whereas compassion already comes up in our papers in various ways, further attempts to highlight compassion as a feature of leadership will probably yield an even stronger nexus between leadership and compassion, thereby establishing it as a constitutive feature of all religious leadership. The example taken from the Jewish sources, with which I am most familiar, suggests that our papers provide the initial insights and intuitions that will become better established through further study and reflection
The summary essay is available by clicking below.