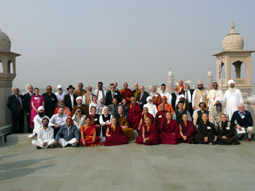 The Elijah Interfaith Institute has taken on the challenge to participate in UN World Interfaith Harmony Week. With the support of The Elijah Board of World Religious Leaders, the Elijah Academy, and the Educational Network, we are hoping to mobilize readers of this newsletter and all friends and supporters in a weekend of global prayers for Hope. From 8th-10th February, on your day of prayer, please join other religious leaders and communities in our movement praying prayers of Hope.

A description of Elijah’s event can be found on the official pages for UN program:
http://worldinterfaithharmonyweek.com/events-calendar/?year2=2013
Description : The Elijah Board of World Religious Leaders will lead single-faith, multi-faith and interfaith Prayers of Hope events over a period of 3 days – Friday to Sunday – in 5 continents and involving at least 6 religions. The spearhead event will be held in Jerusalem, as a symbol of the power of prayer to express and inspire hope in a world where the encounter with the outward appearance of ‘reality’ could lead to despair. We will celebrate diversity within unity and the power of human beings to imbue their lives with meaning by working towards well-being for all.

In order to make this vision a reality, it will not be sufficient to rely on world religious leaders. This is an event for communities large and small. Ideally, different religious communities in one locality would join each other – but the power of prayer does not require physical proximity. To be part of this event, join us through our Facebook invitation, by clicking here

Background
December 21-22, 2012 was a significant period for Elijah. Predicted by some as days of gloom and destruction, Elijah chose the path of hope. We contributed our booklet and video of hope prepared by members of our Board of World Religious Leaders, and  joined others in a project of global prayers for peace and found the experience meaningful. In Jerusalem, Jewish, Christian and Muslim representatives of Elijah shared messages of hope with one another and also prayed at their individual sacred sites. 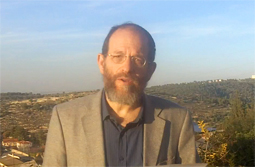 Also that day, Elijah’s Director, Rabbi Dr Alon Goshen Gottstein, took part in a broadcast of prayers from world religious leaders which was part of the Festival of Mayan Culture in Yucatan, Mexico. It was one interpretation of a Mayan prophecy that suggested that 21st December, 2012 might be the end of the world, so the Mexican government responded by asking religious leaders to share their positive messages with their population. Alon’s message can be found here. Our Sharing Wisdom segment is the message that Elijah Board of World Religious Leaders member, Dadi Janki, shared on the occasion. 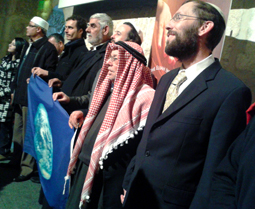 Interfaith Harmony Week is based on the pioneering work of The Common Word initiative, which began in 2007, calling for Muslim and Christian leaders to engage in a dialogue based on two common fundamental religious Commandments: love of God, and love of one’s neighbour. The two commandments are at the heart of the three ‘Abrahamic’ religions and therefore provide solid theological ground. This formula includes all people of goodwill. It includes those of other faiths, and those with no faith.

• Wings for Water Conference in connection with World Water Day 2013 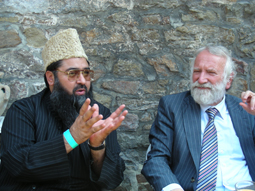 21 and 22 March, 2013 – International Peace Palace, The Hague
On 22 March 2013, the Dutch government will host the official celebration of World Water Day 2013 on the theme of Water Collaboration. An integral part of this intergovernmental gathering is a full day seminar on 21 March called Wings for Water, which will be co-facilitated by the Jacob Soetendorp Institute for Human Values founded by EBWRL Steering Committee Member Rabbi Awraham Soetendorp. In this event, religious leaders will take part prominently.

This may be the first time that in the UN-led process on the Millennium Development Goals (MDGs) religious leaders are involved at such a high level, and according to Rabbi Soetendorp, Elijah has contributed in strong measure to this breakthrough.

In May 2012, the Board had unanimously endorsed the interreligious statement “Towards Rio + 20 and Beyond – A Turning Point in Earth History” that had been drafted by Rabbi Soetendorp. The declaration called on the world’s governments to seize the historic opportunity provided by the Rio + 20 Conference to bring the world on a sustainable course and included commitments of the religions to work together to bring about the changes in our values, lifestyles and economic structures for making the transition to justice, sustainability and peace.

Rabbi Soetendorp and his co-worker Michael Slaby presented the statement in Rio de Janeiro, and in the aftermath of the Rio + 20 conference, Rabbi Soetendorp entered into negotiations with officials in the Dutch Foreign Ministry which led to the facilitation of the Wings for Water Conference.

The Soetendorp Institute is now working on a Wings for Water Wake Up Call on Water Collaboration and is framing a thematic focus paper on water from an ethical perspective. It also started to prepare an inspirational booklet which includes statements on living water from religious and spiritual traditions. To contribute to this process, please send statements, quotations and passages from our traditions and holy scriptures on the sacredness of water and relevant ecumenical and interfaith documents on water to Michael Slaby at mslaby@soetendorp.org.

Message of Hope and Peace for Humanity from Dadi Janki, Head of The Brahma Kuamris World Spiritual University, for the Festival of Mayan Culture, Yucatan Mexico, December 2012 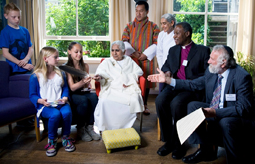 When we look around us, we see that many things are changing.  I am now nearly 97 years of age, and when I remember the world of my childhood; I cannot recognise the world of today.

We are definitely in a time of change and of uncertainty.  Our ancient cultures have told us of this time.  It is a time when humanity will wake up and look to a new world.  It is the time of change from old to new.

People have many questions and many fears.  Many people ask where God is at this time.  We are asking questions of others, but now is the time to ask questions of the self.  There are three very important questions to ask of myself.  These are:

Who am I?  I am more that what I can see and touch.  I am more that my physical body.  I am a being within of peace, love and wisdom.  When I become aware of who I truly am then I can live with calm, truth and compassion.

What do I have to do?  I have to remember who I am as I breathe, as I move, as I talk and as I act.  Do I remember that the whole world is my family?  If I do this then each action will create a better future.

When each of us changes our consciousness, this is the greatest hope for our world.  This wave is already spreading across the world.

We can change our consciousness only when we remain connected to the One, the Source of Love, of Peace and Truth.  Where else will I receive the power to change?  No human being on this Earth can give us the power to change, only the One.

Om Shanti – A Greeting of Peace