We the undersigned, religious leaders who believe in a creator God, guide of the universe, firmly express our conviction that our religious traditions  categorically oppose the use of terrorism. Terrorism is an abomination in 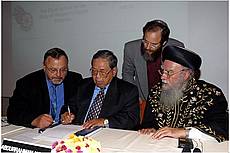 the eyes of God and opposed to a proper understanding of our respective scriptures. It is also opposed to every principle of humanitarian concern. In all our religions God is affirmed as merciful and compassionate and calls on us to be compassionate and merciful accordingly. Causing suffering in God’s name is opposed to the will of God. We affirm the highest religious value to be the sanctity of human life. We condemn those expressions of our religions that speak in the name of our religions and that endorse the use of terrorist means, such as suicide homicides, to achieve political or other goals. While we recognize the value of deep belief in our faiths, to the point of offering our lives for them, this must never be confused with harming innocents in the name of a cause. We also believe that one of the consequences of terrorism is the creation of immense suffering not only for the victims of terror, but also for those who seek to benefit from it, or through it. We encourage religious leaders of all traditions to firmly express their religious conviction against terrorism, thereby helping to purify our religions from a contemporary cancerous growth that threatens to destroy our human face.